This interview with Ann Rea by Jonathan Fields for Good Life Project is fantastic. Ann quit her job and turned back to her love of painting- and that is wonderful and all, but it's how she created her own marketing successes that is really remarkable.

She didn't just try and sell her art, she got creative and focused in on an underserved target market: who has money to buy art? where do collectors hangout? where did she want to spend her time and create some of her best art?

And when she narrowed in on wineries she took it to the next level and created salon events where folks could experience her, her art, and taste the wines- how brilliant is that?! 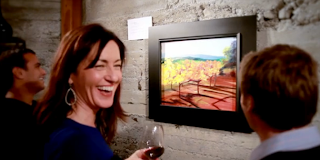 Then with an idea from Bob Proctor she began offering An Experience of Art for high-end clientele with their own custom paintings of what location means the most to them and a storybook she creates with details of the experience. What more personal and profitable pairing can there be? For an artist she is one savvy business person!

Ann is such an inspiring case of questioning our assumptions. Simply starting with her, a friend (and I'm going to guess some wine), and a blue skying session she changed her life.

I don't think it is as easy as she makes it seem, but so what? Why not try and take our ideas and talents in a different direction and see what we can create? Her art is not just lovely to look at, the way she is delivering it and living her life appears to be as artfully done as well... Cheers to her and the lesson she shared so beautifully!
Posted by Joy 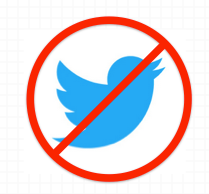 Tweeting to me is connecting with people and finding out the latest information going on in the world. People and companies might have different uses which is their business but when something like yesterday's bombing at the Boston Marathon happens it should be a flag up that you need to either rethink you social media plans or build in an emergency tweet stop. It was annoying to say the least when trying to get information on a friend running the marathon that all these scheduled tweets kept showing up in my feed. My annoyance is not the point though... your branding is.

Gary Vaynerchuk summed it up best:

If you must use someone else to tweet or use an auto program (which you totally don't have to!) make sure you have plan when a national tragedy is striking. Out of respect, out of decency, and selfishly out of your own branding value: don't tweet when others are looking for news, mourning, or trying to really connect- otherwise you look like an ass.

Attention TweetDeck: My suggestion is to have an auto-stop on scheduled tweets in times of national crisis. This can be an option that is chosen at set-up and sends a notification to user that their tweets have been stopped due to X-reason which can be restarted easily. Or a second option is a notification that gives them a heads-up there is a national tragedy/disaster and that they have option to reschedule all tweets to resume X-hours later. I believe this would be a highly useful and appreciated option for your users.
Posted by Joy

Last week it was announced that Jimmy Fallon would be taking over for Jay Leno on The Tonight Show. I like Jimmy Fallon he's talented, sweet, entertaining and all but it's a mistake. I'm not a big fan of Jay Leno but from the business side of things they should leave him in the spot for a few more years.

Why? He's still number one in the ratings, Jimmy Fallon will not beat Jimmy Kimmel in the demographics they think they want, and NBC is trying to compete for a small share of younger demographics instead of owning the older and it won't work.

Letterman has a solid audience and most will stay with him; Jimmy Kimmel's audience is unlikely to leave in droves; Jon Stewart (my personal favorite) is on 30 minutes earlier so some of Colbert's audience might go to one of the Jimmys but most likely all NBC is doing is alienating their older more conservative audience.

If NBC had moved Fallon before Kimmel's move then it would have made sense but now Kimmel has a whole year to hook the 10:30/11:30 slot and Fallon is going to not only have to pick off others' viewers he will have hard time keeping all of Jay's.

Yes young demographics are great if you can get them but better to own the older and be on top then to try and fight among many to get a slice of what they think they'll want. Now Jimmy will be competing with Conan, Colbert, Letterman and Kimmel. And that's if Jay doesn't hop to Fox or someone else to do his own thing.

Bottom line: If NBC is going to go for younger, fresher audiences they need to lead and go first with things or they should not give up on they ratings and profits that the Boomers bring. Boomer bucks are way better than nothing.
Posted by Joy