The Nobel Question: Will You Be Remembered for.. Destruction 🧨 or Peace? ✌️

We are in surreal times... the Trump administration, the pandemic, half the nation upset with the other half over their denial regarding what's true (or not) about both.

You need not be American to partake in the battle over what's going on in the US, as is captured in above Q&A clip with former Prime Minister of Australia, Malcolm Turnbull, getting into it with The Australian's editor, Paul Kelly. News Corp & Rupert Murdoch's influence in Australia is as hot a topic down under as is Fox News' here.

Which reminded me of one of my favorite stories of all time.. how there came to be The Nobel Peace Prize: 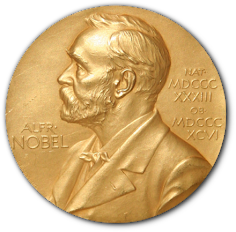 When Alfred Nobel's brother, Ludvig, died the obituary accidentally named Alfred and stated  Le marchand de la mort est mort
("The merchant of death is dead").
It went on, "Dr. Alfred Nobel, who became rich by finding ways to kill more people faster than ever before, died yesterday." An inventor with 355 patents he was most well known as the creator of dynamite.
Appalled that this is how he would be remembered, his last will specified that his fortune be used to create a series of prizes for those who confer the "greatest benefit on mankind" in physics, chemistry, physiology or medicine, literature, and peace.
119 years later a Nobel Prize is known as an honor and as a contribution to humanity.
I bring this up as a reminder to us all, but especially the Murdochs, Trumps and all GOP leaders, and any (D) & (I)s as well, who are sowing discourse for the sake of money and power.
Are you bringing our country together or dividing it? Are you taking a principled stand or just riding a populist wave that is built on people's pain and fear?
If this COVID has taught us anything, it is how lucky we are to be alive in a time where science and available advancements bring us hope. But also, that today's technology paired with some of our fellow-citizens' lack of belief in this science and willingness to cooperate as a nation can also have disastrous consequences as well (hello, climate crisis!).
Even with the fantastic recent news of vaccines on the way, none of us knows what the upcoming year will bring. Or the year after or after that or for the rest of the years of our lives. We only have what we stand for. What we foster. Sure it's great to be rich and powerful, but it might also be the time to ponder what our obituary will say? What legacy we will leave behind for our kids and our country?
As relevant as it was those many years ago is the question:

Are we looking to blow things up and cause more destruction

or bring our nation and our world together and create peace?

What do we Prize?