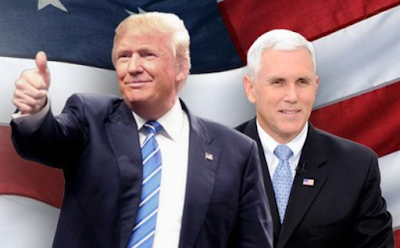 Mueller might take too long and there are threats of a revolt and violence if Congress makes a move to impeach... so now there is only one clear path to getting 45 to go and that is by making Republicans do it themselves.

And the only way they will is to tie them to him and have them firmly stake their future on his.

Mike Pence is a constitutional officer who has sworn to support and defend the Constitution of the United States against all enemies, foreign and domestic. He was the head of the Trump transition team, has a security clearance, gets regular briefings, talks to the president daily, and I'm assuming also has a TV, internet access, and a subscription to a paper or two. If he doesn't know what's going on at this point, he can't claim himself commanding enough to lead our country at any time in the future.

Therefore, it is now time to demand that Vice President Pence either get Donald Trump to step down or stake his own personal reputation and future to Trump's. He has more access to knowledge, intelligence, and occasions to observe 45's erratic behavior then almost anyone and it is literally his job to step up if the president is not capable of commanding the country. Every reporter should ask:


Is Trump physically, mentally, and morally up to leading our nation?


If President Trump is ever found to have committed crimes or enrichment against U.S. interests will you stand behind Mueller's findings and commit to not pardoning his behavior and let all consequences stand?

If he wants to stand there with all the smoke swirling around Trump, his campaign, his business profiteering, and his policy making then Pence must stake his honor firmly and unwaveringly.

Pence has a rule he will not be in a room alone with a woman who is not his wife, he should have as high of standards to not serve a man who is this corrupt, dangerous, dividing and damaging to our nation. Let's get him on the record now and clearly.

He's either a man of honor or of complacency; it's time to make him choose which.

Note: We need same 1st question asked of all Cabinet Secretaries with follow up:


If President Trump is ever found to have committed crimes or enrichment against U.S. interests will you seek to rally and get behind a 25th Amendment remedy?

This sums up Pence issue clearly. He knows Trump is ill-equipped to run the country but pretends he doesn't which is not only fraudulently authentic it is a danger to our country: