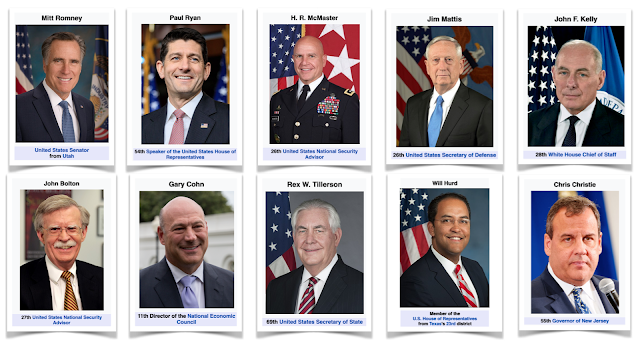 Democrats can not stop Trump, only honorable Republicans can.

The Democrats alone can not successfully contain Trump when so many Republicans are enabling his lies and deceit. The only way to unite our country is for the men who have witnessed his unfitness firsthand to stand up for our democracy. Otherwise it appears simply political: left vs right. When instead the real fight is with what's constitutional vs what's corrupt.

Why these 10? Because they are leaders/respected members of the Republican Party and they have had direct dealings behind the curtain in the White House. They have seen the chaos and they know what danger there is in four more years of this. They are not never-Trumpers. People will believe them.

They must do it as one in a united stance. It's easy to bully and ostracize one member at a time but if they stand together they not only make a bold statement, they begin to redeem the Republican Party from putting the US in this mess in the first place. They start to return the GOP to a place of leadership on security, rule of law, and morale clarity. If they don't stand up to Trump now, he will be the face and voice of the GOP for decades to come. Is that the legacy they want to leave their party, let alone their children?

Motivation: Doing the right thing and living with one's head held high should be enough of a reward but there are others. The folks that demonstrate leadership and clarity in this time will: be seen as future of the party and in great place for future opportunities; be sought after for dealmaking and peacemaking expertise; be hailed as heroes of their party (if not immediately, in history); and they will leave a legacy of bravery that they can be proud of.

Compromised: Some politicians might have had intimidation used against them for whatever reason. The Russians are known for covertly comprising folks and then using it against them as a form of kompromat. The only way to handle this effectively is to issue blanket immunity for anyone who might have been compromised by our political adversary. This needs to be done in a way to preserve as much discretion as possible but seen as a form of cyber (hacking, video, financial) warfare. If our enemies get away with silencing or worse flipping our politicians it puts our entire democracy at risk and will be the tool of choice in all future conflicts.
To handle this, immediate protection must be undertaken so that politicians can come forward to CIA/FBI and be immunized from any repercussions resulting from blackmail/extortion. 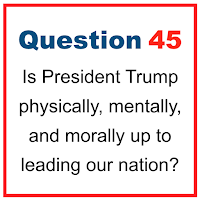 The Question: If not in the impeachment trial, if not in 2020 or even by 2024- eventually Trump's taxes, call records, business dealings, foreign ties, etc will be revealed. It might take time but betting that Roger Stone, Rudy Giuliani, and the Russians won't at some point release volumes of documentation they have kept hidden on Trump seems like a bad bet. History has shown eventually everything comes out. The SDNY has lots they are looking into, not to mention the other cases farmed out in the Mueller investigation. Betting on Trump and his associates is a mighty risky gamble that almost certainly will not end well. So these men and all who have supported Trump in the past must ask: Question 45 👉

01.10.20: A move as legendary as this needs a historic and memorable date so I suggest January 10th for THE 10 to come forward as 1 and speak up for the what needs to be said: Trump is not fit for office. Do it together. Ask others to join you. Unite those that know what is right for our country and make it not a circus but a stance for truth, justice and the American way.

Trump is by far one of the most captivating and entertaining performers to grace a stage but there are real-world, deadly, and irrevocable consequences for letting him stay in the highest office in our land and take our country through more of this. There is no political gain, tax cut or judge worth sacrificing our country or one's personal honor for.

Please help save the republic. Our country needs YOU!


[Note: It might be against policy for even ret/non-active military to speak publicly against Trump but they can still ask others in their circle to speak for them. And for the other Republicans that are either stepping down or have stayed quiet- now is your time to join THE 10: Senator Portman, Senator Murkowski, Senator Rubio, Senator Sass, Senator Ernst, Senator Collins, Senator McSally, retired Sen. Jeff Flake, Sen. Bob Corker, Sec. Kirstjen Nielsen...]
Posted by Joy

The US-Russian saga is the most interesting (and terrifying) thing going on in the world today. And if it's seemed too piecemeal and confusing to follow, I totally get it. But even if you think it doesn't affect you, I promise it does. Therefore, we need to understand even just the basics.
So here we go...

Where to start? Let's begin with:

Putin
He believed the collapse of the Soviet Union was the greatest geo-political catastrophe of the century. As a KGB officer he was humiliated by the fall of the USSR and blamed the west- specifically the United States. He's made it his mission to bring Russia back to its former glory and will do anything it takes to humiliate the U.S. and vindicate his homeland.

Watch Putin's Revenge the two part series from FRONTLINE to understand why Putin hates the U.S., despises Hillary Clinton, and desperately needs to have a way to protect himself and his wealth.

In order for Putin to get revenge he needs two thing: money and power.

Money
Putin needs money: one to maintain his power and two to ensure his safety. But it does him little good to hoard all his money in Russia so he needs to launder it out of the country. He was doing that successfully by building up oligarchs' (beholden to him) fortunes until lawyer, Sergei Magnitsky, working for an American-born British financier, Bill Browder, was tortured and killed while in a Moscow prison.

Browder vowed to avenge his lawyer/friend's death and lobbied and passed the Magnitsky Act which:


authorizes the U.S. government to sanction those who it sees as human rights offenders, freeze their assets, and ban them from entering the U.S.

Hear more about Browder and Magnitsky in this Stay Tuned with Preet podcast or this interview. It ties in why Putin was desperate to get sanctions removed and why the Trump Tower meeting which invoked "Russian adoptions" was really codeword for getting the U.S. to remove these financial restrictions through a back channel.

Active Measures
If the oligarchs, and therefore Putin, are prevented from laundering money out of Russia they are backed into a corner and feel provoked to do ever more desperate things.

What they did was accelerate ongoing active measures:


Active measures is a term for the actions of political warfare conducted by the Soviet and Russian security services (Cheka, OGPU, NKVD, KGB, FSB) to influence the course of world events.

These measures included calling in favors from the likes of Paul Manafort and Donald Trump to the Russian mob that had aided in money laundering and suspicious dealings over the years.

So how will Putin ensure sanctions are removed and maintain his power and wealth?

Roger Stone
Well, before we get to the how we need to introduce Roger Stone into the picture. It's easy to think Roger is just a bad joke and write him off as a would-be-Batman-villain, but in actuality he is one of the most important back-seat political drivers of the last 40+ years.

Watch Get Me Roger Stone to see how one man messing around behind the scenes- not to mention blatantly in front of the cameras- can alter an election in front of our very eyes. See how his ties with Paul Manafort (they were business partners from back in the 80's); his 30+ year relationship with Donald Trump; his dirty-trickster ways; and his link to WikiLeaks affected the 2016 election.

For the logistics of the how, we check in with Steve Bannon and the Cambridge Analytica folks. Their manipulation of our data through Facebook and in conjunction with Russian active measures was a perfect storm which blew Trump into office.


This accomplished several things for Putin: took down Hillary Clinton, stirred chaos with Trump and U.S. allies and got our fellow citizens to turn against each other.

Putin has been successful using active measures so much so we are now in a place where Republicans who were until recently staunch Russian opponents are now either doing his bidding or at least not preventing him from waging a cyber/disinformation war on the American public.

Are our politicians infected with Russian influence-za? Do they not know what is going on beneath their very noses? Or are they choosing to surrender our elections and our very democracy to save their careers and their power? Is this Putin's dream come true or are we going to wake up and unite behind securing our elections, holding accountable those who betrayed our country and defending our nation from foes foreign and domestic? 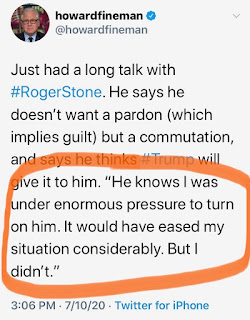 One would ask: what information pray-tell would Roger have on Trump that would allow him this leverage? And if Trump is willing to play ball with Stone what would he be willing to do if Putin had kompromat on him?

Our elections are coming and Trump will do anything to stay in power so he doesn't need to face charges and investigations he is now shielded from as POTUS. Roger Stone and Paul Manafort are now out of jail and we as a country are more divided and distracted from the real enemy.

Pronoun Power: The Quest for Singular "They"

When I was writing my book I had my dear step-Mom read a draft and when I asked her for her thoughts she said she loved all but two things: my grammar and my punctuation. My reply was that I was lucky enough to have a brilliant editor who'd fix all my errors so she could rest assured the world would not know how atrocious my actual writing is.

Most of the time I agreed with the changes that were suggested to me but one particular back-and-forth I do remember having with my editor was how they is a plural and I could not use it in the singular for a sentence I was trying to include. I was annoyed but eventually acquiesced 😒

Fast forward to today when we are trying to be a more inclusive non-gender-biased world and well meaning folks who are guarding the rules of grammar are torn about how to use a plural pronoun in a way that can be adopted by individuals who would prefer not be identified as either he or she.

Well, finally my quest for using singular they has risen to include a social component that makes it ripe to be embraced. Still I thought why not avoid the grammar wars and instead forge a new frontier.

So today I take the bold step of suggesting we create a new pronoun that can stand in singular non-gender form but include all people: thay / thair.

Pronounced the same but used to represent "a" singular person instead of a plural.

Pronouns are simply words but when someone is disempowered by having to identify themselves as one that does not fit these words can wound. They can be used by ignorant people as weapons of division. Let's keep the meaning they has held but add thay as a sign of the times and a pronoun that gives power to our communication that we can all back.

Power to the Pronoun! Power to ALL the People: he, she, thay!