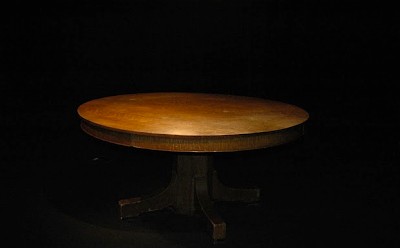 I refer to Charlie Rose a lot- maybe weirdly too much. But some people don't know his PBS Show so I describe the gentleman sitting at the table and they instantly know who I'm talking about. Sure Charlie is delightful at his morning gig but his real element is the long slow interview where he actually has a conversation with someone and is not limited to 5 minute segments. This is the format that he has perfected and it's brilliant. And though it's 99.9% Charlie and his mastery of asking questions and steering the widest ranging conversations from politics to culture to brain-science-- there is that table.

Last week Charlie was finally interviewing Louis CK on his morning show (see previous post) but it was just starting to get interesting and he had to go- boo! Not only would I love to see Charlie talk to Louis for the hour (that's what he calls it when he has the guest for the full hour segment) but I also thought I would love to see Louis at the table talking to his idol Bill Cosby. How amazing would that be? I KNOW!

So this got me thinking... why not give Charlie a few days break a month and let some stars interview the people they admire ala Charlie-style at the table? Genius, right?

Table TIME: Star on star interviews at Charlie's table sponsored by TIME magazine. In return for sponsoring the show they would be able to promote the best of the interview in a few content segments on TIME.com. This would promote PBS, TIME, and the interviewees... win-win-win.

No one could ever replace Charlie but part of what makes him so respected is that he took a table and some lighting and made it the modern day interview gold standard. To give some interesting folks a shot at the table is a great tribute to what Charlie has built.

Louis, Mr. Cosby would you like to talk some TIME at the table?