Tell someone that the Earth is getting a couple of degrees warmer... meh. Show them those aren't fluffy clouds floating over Beijing, that it's a layer of pollution that is contaminating everything from the air, to the water, to the land. Demonstrate how carbon, chemicals, and China's smog doesn't just taint the surrounding areas (update: and kill 4,000 people a day), but leaves even small towns in Michigan worried about the mercury that is poisoning their lakes and making their fish dangerous to eat. Allow any area of our planet to get polluted and we all reap the consequences. And with more developing parts of the world starting down the road we have for decades it's only the beginning of an accelerating problem. If we don't act now we will have smog to breathe, a tainted food and water supply, and very likely irreparably damage our grandchildren's health and very world.

Politically it is ridiculous that we are still debating whether we are doing damage to the planet- there is no doubt we are. But in order to get moving on a solution we need to dumb-down-the-debate. I know it's sad but we can't talk facts and science we need to get guttural and go back to basics. Global Warming effects are too subtle for some people, so stop debating... go back to calling it pollution and no one can debate the visuals on that. 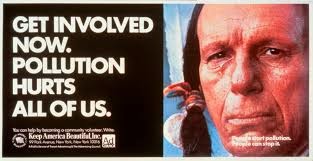 When I was a kid we had Woodsy the Owl and the Keep America Beautiful Indian- they worked. Kids bugged their parents not to litter. People wouldn't publicly throw trash on the ground or at least there was some shame attached. Let's go old school and get a cute mascot and talk about how bad pollution, of all kinds, is to our world.

The toxicity of our planet is not a cute, fuzzy, frivolous matter but science is not working and when something's not working you need to try a new game plan. We need to: promote the Pollution angle- it's simple and undeniable; come up with some cute polar bear who talks to the kids; and call out any politician who denies pollution is a problem.

Subtle slogans don't work, pound the Pollution Problem and I think we'll get at least a genuine conversation going.

Time to find a solution to Killer Pollution!!
Posted by Joy